This is Peppa Pig.

My kids watch Peppa almost every day, and I have devoted a lot of time to dissecting her outfit. While you may not immediately think of Peppa as a style icon, she serves up a classic look: red shift dress with black flats. One could imagine Audrey Hepburn in the same.

A shift dress is one that shifts with your movement, basically loose fitting and with no defined waist. Here are some examples, all Diane von Furstenberg only because I own a DVF shift and can speak to its magic. 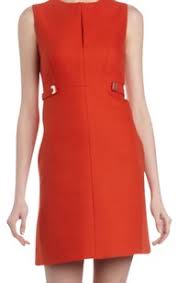 Jackie O has been credited with making the shift famous, although I think this is more of a sheath, which is more form fitting and formal.

Because it has no defined waistline, the shift shaves off about 10 pounds. I’m a pretty strong pear shape, but you would never know in the forgiving lines of my DVF shift. Other than its V neck design, my shift is a dead ringer for Peppa’s.

Styling the shift: a study in shoes

Unlike Peppa, I style my red shift with nude flats instead of black. This way, my legs don’t look cut off at the ankle. The nude makes it appear as if my legs stretch longer than they actually do. Plus, the red of the dress is enough. No need to overdo it with another strong color. Keeping the shoes soft lets the dress do the work.

My skin is light, so for me this is nude. Probably too pink for most.

This may be closer to your nude.

The point is to match the skin so it blends with the shoe instead of causing the eye halt at the shoe.

And please, no heels with a red shift (at least not for daytime). It’s just trying too hard. If you have to, get a nude with some decoration, like these Valentinos.

Or these d’Orsay flats, which basically means cut out on the side.

The nude flats I wear are Classiques Entier from Nordstrom with a matching bow. I’ve worn them so much that I had to have the soles replaced, and I don’t even think Nordstrom sells Classiques anymore, which goes to show how long they’ve carried me through.

Like some of my favorite fashion items–muumuus, uniforms, tennis shoes–Peppa is nothing if not practical. She doesn’t wear her black flats when it rains. She changes to canary yellow rain boots.

It’s a cute take on color blocking. Red and yellow. Ketchup and mustard.

And a good rain boot is hard to beat. Go with Hunter. They’re the best quality and make just about every color imaginable. I suggest tall in classic green. Same as the royals. Mantra: Good enough for the queen, good enough for me.

If you walk to work, Peppa’s got you with her classic ensemble. Invest in a well-made shift in a bold color. Pair with Hunter rain boots in inclement weather. Pop your nude flats in your bag until you get where you’re going.

Style with a little bit of humor, mandatory. Jumping up and down in muddy puddles, optional.