On the day I turned 40, my 4-year-old son and I went to the Midwest for a funeral. That’s about as bad as it gets, folks.

Turns out, our April travels were a good distraction from my advancing age because, man, there was a lot of weather: rain, flooding, tornado warnings. If you’ve ever been to the Midwest you know that spring can take a while to get sprung.

For those not familiar with the Midwest, it consists of 12 states, roughly in the center of the US (more on Wikipedia). Although I grew up in Southern California, the rest of my family has lived in the Midwest since we migrated out of Europe, according to 23andme.

There are a lot of trees in Midwestern states. There are also cows and horses, necessitating a lot of barns. I’m making it sound boring, but it’s pastoral and beautiful, especially in the fall when the leaves turn colors and in the spring when the sun returns to warm the frozen land.

Pee Wee and I landed in Indianapolis during torrential rain and had to make it to Kentucky by 1 pm the next day. We rented a car and headed south to grandma’s house (Pee Wee’s great-grandma). I white-knuckled it the entire 2 hours as the small rental car shimmied in the downpour.

We woke up the next day and headed south on a route dictated by Google maps—MISTAKE.

Our road was flooded and barricaded. But so was the road to the right and the road ahead. The only open road was the one we’d just driven down. And there’s not a lot of cell service in the woods to find an alternate route, so my only choice was to turn around and go back the way came.

I spotted a lone truck coming down the road (Large Marge?). Desperate, I flagged it down. The driver said that the road he’d just taken was only half flooded and that we could drive around the barricades and make it to our original route. The funeral was for a beloved family member and this was the ONLY thing we had to do on time the ENTIRE trip, so we were gonna get there, come hell or high water (on the I-256 East).

Are we there yet?

After all that driving, Pee Wee was done with his booster seat. (I bought one of those Mifold travel boosters.) He said the hard plastic hurt his butt. So, for the long journey back to Indiana we padded the booster with a down vest. This caused him to slide around, but at least he didn’t complain.

The absence of complaining could have also been due to (a) the tornado warnings blaring on the radio and the terror they incited in us or (b) the bad parenting advice I’m about to impart:

When traveling with a small child, pack a large bag of junk food and gum. Give it to them and let them do their worst. Drive as fast as you safely can.

Or maybe it’s just my family that’s weird. But once back in Indiana, I realized that my grandmother needs two things for Christmas: a trash can and a therapist. She has too much stuff. And it’s the stuff of nightmares. 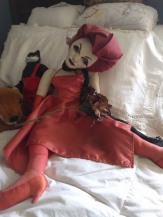 But the buildings are good

I’ve always loved the sturdiness of buildings anywhere but where I grew up, which is in San Diego. In Indiana, the town where my family is from–Bedford–is the limestone capital of the world, so most buildings are made of the thick rock.

My grandfather built this one. It’s by far my favorite building in existence, made almost entirely of Indiana limestone.

Built in 1967*, Bedford Federal is the bank where my grandmother still transacts to this day. She told me about how it was commissioned by the bank’s then-president Mr. Kenworthy, who she described as “uppity” and “into details.” (This is not a diss. My grandmother is those things, too.) Recently, she found the original artist rendering and plans to donate it to the bank for display (click here to see the rendering on page 6).

* According to my grandmother. I was unable to corroborate this date in the bank’s history. 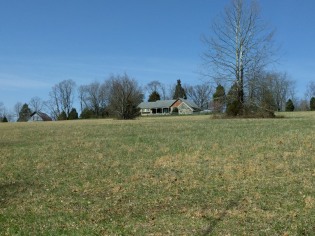 The field stone on my grandmother’s house

My grandmother said that stone masons were brought in from another town because the local masons couldn’t work with stone that wasn’t flat in the 1960s when the house was built. She also told me that the men who worked on her house had long hair and “looked like hippies.”

The trip was short but sweet. Pee Wee and I never found the basement at the Alamo, but we did see real cows, rain, and barns from our Alamo rental car. Our adventure ended back in our beloved San Diego, and we hightailed it to the beach because, as much as we love our weird Midwestern family and the exotic scenery, we are definitely city kitties best adapted to the West Coast.

Cat of Lezure is a blog about Yippee Stardust, a Persian house cat turned Airsteam camping cat. COL is an expansion of Life of Lezure, a blog formerly about finding style & leisure in everyday life. Old posts can be found in the Archive section of the blog.
« Previous Post
Next Post »