TED Talks have been giving me life. Whenever I have a few minutes at home alone, I try to sneak in a TED Talk. They’ve gotten me through some dark times at best and given me new ways to think about things at least. And they inspired my now-defunct meditation routine (see Meditation for Ding Dongs Challenge).

Did you know that TED stands for technology, entertainment, and design?

Here are some of my recent favorite TED Talks. Promise me you’ll listen to at least one. (And if you only listen to one, make it Jaron Lanier’s talk about the internet. This one really blew my hair back.)

Do you know about Brené Brown? I’d seen her name but did not know much about her other than she’s associated with people like Oprah and Reese Witherspoon–ie, positive people. Turns out, she’s a researcher (and storyteller) who examines humanistic topics like vulnerability and shame. Brown goes so far as to say that vulnerability is the key to connection, and that connection is kinda sorta the meaning of life. *Heavy*

And then had this to say about the shame of it all:

The takeaway is that we need to put REAL selves out there if we want to connect with others. Doesn’t that speak to you in these times of curated social media perfection?!

Not a TED Talk

So, in keeping with being vulnerable and showing our failures, here’s something I made and pretty much failed at recently: this microsuede caplet. 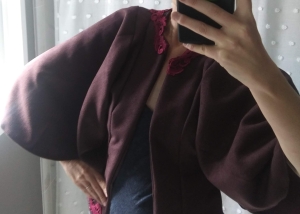 If you have eyes you can probably see why it was a failure, but let me explain. I recently learned to sew. Actually, I recently learned to turn on and thread and kind of use my sewing machine. I still have a long way to go with the sewing. But this particular pattern was labeled “for beginners.”

Liars. It was hard. As someone who failed high school geometry, I miscut numerous pieces of fabric. I could not figure out how they fit together. I skipped about 4 steps. And then put a bunch of proverbial Band-Aids on the thing to cover up my shitty sewing job just to be done…countless hours later.

And because I have this sexy lifestyle-ish blog with a focus on fashion and design, I really didn’t want to showcase this caplet that makes Forever 21 clothes look like Ferragamo. But then I heard Brené Brown speak and here we are.

Also important if you use the internet…

…this talk by Joran Lanier, a virtual reality pioneer and philosopher, in which he breaks down how the internet came to be and what we need to do to fix it. He gives a fascinating vision of the potential of computer science but warns about the current system of behavior modification with social media. The driver is advertising, and he pretty much says to deactivate your accounts. You really shouldn’t internet without seeing it:

And a MUST-SEE if you have kids is this talk by James Bridle on the evils of YouTube. Basically, don’t let your kids watch it, and here’s why:

Ending on a lighter note: gaming

And this one on gaming and how we can use video games to create a better, more solve-able world filled with “epic wins.” Who doesn’t want more epic wins? This one makes the cut because it presents a point of view that I never would have considered ever, and that’s everything I love about TED Talks.

Most of these are under 15 minutes long. Do yourself a favor and listen to them over the course of a few lunch breaks. Then meet me back here. Where it’s safe. And the only thing modifying behavior is my bladder. *Pee break*